Attila the Hun: The Scourge of God and the Sword of Mars (God)

Most authors are fascinated by their characters, regardless whether they’re good, bad or a bit of both. We live, sleep, eat and dream with them always lurking somewhere about. Attila the Hun is one of the more sinister characters in my book, On the Edge of Sunrise and featured here on my ‘Happenings’ page. History has painted Attila as fierce, strong, greedy, proud, brutal and ‘The Scourge of God.’ However, to many who have studied the recorded history on this legendary warrior, there is also evidence that he was respected, admired and considered to be fair. Attila’s name means ‘little father.’ His grandfather, a Hun king, named him. He believed that Attila’s future pointed to the leadership and destiny of the Huns. 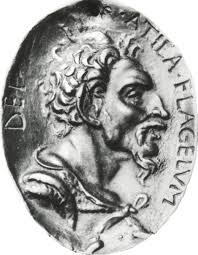 As a ruler, Attila might be considered a revolutionary. He understood that if the Huns were to grow into a great nation they must learn from peoples more advanced. His own personal circle of advisers consisted of men from foreign backgrounds. Orestes, one of his better-known military advisors, was married to the Roman daughter of the commander of a Roman province. Later, Orestes’ son Romulus became the last of the Roman emperors in the West. The men around him spoke Latin and Greek and ‘knew the outside world.’

Hun society and rulers were polygamous and so was Attila. Among the Huns, an aristocratic status existed. Birthright privileges passed from father to son. In the time of Attila, court etiquette was elaborate and his ruling class enjoyed luxuries that included silks, gold and silver ornaments, jewels, spices, even Phoenician dates and Indian pepper.

When Attila was a young man, he was dispatched to the Roman Western Empire as a 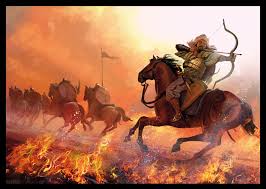 political hostage. Here Attila came to believe that the Romans were morally corrupt and driven by their desire for pleasures. He concluded that the end was in sight for the Empire. Attila ‘vowed never to give up the old ways.’ For this reason, he always lived a Spartan existence. The Roman historian, Priscus, wrote about Attila, ‘His dress was plain, having care for nothing other than to be clean, nor was the sword by his side, nor the clasps of his barbarian boots, nor the bridle of his horse, like those of other Scythians [Huns], adorned with gold or gems or anything of high price.’ Attila believed after he left Italy that one-day he would return as a conqueror.

One of the legends tied to Attila is the Sword of God (or Roman interpretation: Mars) and also referred to as the Sacred Sword. Attila grew up listening to the story of the Sword of God, which the shaman’s used to recite to him. The legend told of a ‘sacred sword’ won from the Scythians after the Huns and the Magyars conquered them. When Scythia became to small to hold them, the Huns decided to move west, while the Magyars remained. However, they had shared the sword. It was decided they would give the sword to a blind man. He would twirl with it in hand seven times and then let it go. If it fell facing the west, then the Huns would carry it with them. If it fell to the east, it would remain with the Magyars. On the seventh spin, a gust of wind picked up the sword and ‘swept it toward the west until it was lost from sight.’ The Huns moved west, entered Pannonia (parts of modern day Hungary, Austria, Serbia, Croatia, Slovenia, Slovakia, Bosnia and Herzegovina). Here they defeated the Germans and the Romans and ruled peacefully for years. The shamans warned Attila to never try and build the Hunnic Empire without possessing the sword.

One night, after Attila was king, he dreamt that he flew carried on a whirlwind over Europe and Asia. In his hand, he held the Sword of God. As he brandished the sword before him the forests bent, the seas parted and cities fell. When Attila awoke, he summoned his shamans to interpret his dream. The chief shaman, Torda, answered, “The meaning of your dream, my lord, is that you shall soon find the Sword of God, and with it you shall conquer the world.”

As soon as Attila heard the prophecy from the shaman, according to an account by Priscus, a shepherd boy appeared with a sword. The boy, noticing that one of his sheep was limping from a wound, followed the bloody trail and dug up the sword and brought it immediately to Attila. Attila ‘rejoiced at this gift and, being ambitious, thought he had been appointed ruler of the whole world, and that through the Sword of Mars supremacy in all wars was assured to him.’

Now with the Sword of God in his possession, Attila felt empowered to realize his dream of conquest over the eastern and western Roman empires. However, before Attila could complete his goal, he died on his wedding night generally believed from an ‘effusion of blood, without any wound, and the girl [wife] with downcast face weeping beneath her veil.’ It was stated that an artery burst and Attila died of suffocation from a ‘torrent of blood.’ By the sixth century it was being recorded that Attila’s bride had murdered him, but it’s a belief without any evidence.  In the recent news a report surfaced that Attila’s grave was found, but in the following months, it proved to be fake. Attila’s followers allegedly buried their king with great riches and strove to make his burial site hidden for perpetuity.

4 Responses to Attila the Hun: The Scourge of God and the Sword of Mars (God)